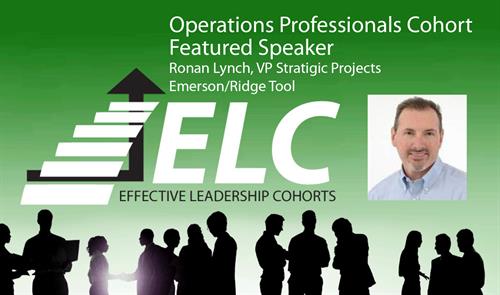 Ronan has held a variety of roles in, not only multiple US locations, but global locations as well. Ronan joined Emerson in 1993 as a design engineer in Cork, Ireland. From there he was promoted to a General Manager and relocated to China. After two years, Ronan moved his family to Orange, VA, where he was Plant Manager of one of Ridge Tool Company’s manufacturing locations. After spending four years in Virginia, Ronan moved to the Cleveland, OH area where he took on operations responsibilities for the entire organization, first as a Director, then as a Vice President. Recently, Ronan was promoted to his current role as Vice President of Strategic Projects.

This Cohort is intended for professionals who are interested in gaining and supplying support, knowledge, and education within a group of their peers pertaining to topics that deal with Operational Management positions. This group might be of interest to those in the fields of Risk Management, Insurance, HR, Financial/Accounting, and Operational Management Positions.